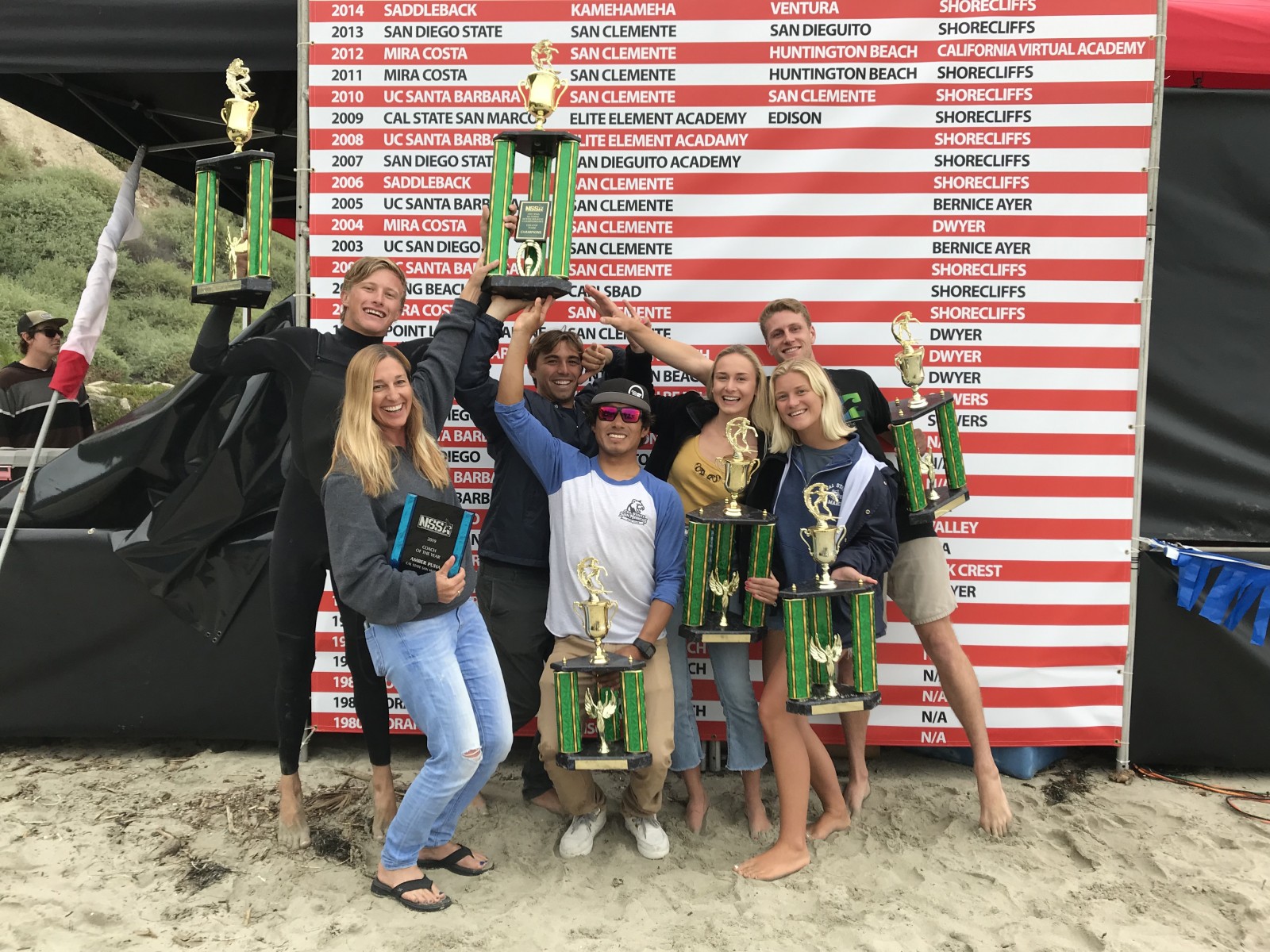 A towering gold trophy with green pillars sits on a desk in Amber Puha’s office on the sixth floor of Craven Hall, the spoils of the Cal State San Marcos surfing team’s national championship in 2009.

It soon will be joined by a companion.

Ten years after that breakthrough title, CSUSM added to its collection. The Cougars won the second national championship in program history with a victory last month in the National Scholastic Surfing Association’s college competition at Salt Creek in Dana Point.

It marked the latest milestone achievement for the club program that has been led by Puha, the team’s faculty adviser and a CSUSM math professor, since its inception in 2002. In February, the Cougars won the first conference title in their 18 seasons as a club sport with a victory in Santa Cruz.

“It’s interesting to think that we’re celebrating the 10-year anniversary of the first national championship,” said Puha, who was named coach/adviser of the year by the NSSA. “It really speaks to just how many elements have to come together to make something this special happen. It’s been a lot of fun to be a part of, to support the students and all their efforts to accomplish this.”

CSUSM entered the one-day national competition as the top seed despite finishing second to Point Loma Nazarene University in the state championship in March. The big unknown, Puha said, was what kind of challenge the Cougars would face from the five-team contingent from Florida.

It turned out to be a strong one, as CSUSM edged the University of North Florida (located in Jacksonville) for the title, 130 points to 121. Point Loma Nazarene finished third with 105 points, ending its remarkable streak of national championships at four.

The Cougars’ MVS (most valuable surfer), according to Puha, was Evan Sandison, who placed third in the men’s contest. Sandison is a transfer from Mesa College who grew up in Dana Point and frequently surfed the Salt Creek break in high school.

“I felt really comfortable competing in my hometown surf break,” Sandison said. “A little bit of luck and experience go a long way. One of my goals for the year was to make a finals appearance, and that moment came at a perfect time.

“Winning the national championship with this team was the biggest achievement I have been a part of.”

Other individuals who powered CSUSM’s victory were Giancarlos Urcia Calle (sixth in the men’s division), Maya Saulino and Maile Davis (third and fifth, respectively, in the women’s division) and Jack Costello (fifth in the coed longboard division).

In September, the Cougars will be recognized by the San Marcos City Council for their accomplishment. But they don’t have much time to bask in their championship, as tryouts for next season are on Sept. 15, with the first of five regular-season events in late October.

CSUSM’s chances of defending its title seem strong; Costello is the only loss to graduation from the 2018-19 roster, and he likely will be replaced as longboarder by Jake Tousseau, who missed most of last season because of rib surgery.

“We should have a really talented crew, and they should have a good shot at repeating,” Puha said. “But it’s always one step at a time. You can’t look to June; you gotta look to September. So that’s where we’ll start.”

Jamie De Revere, who received her master’s in kinesiology last May, recently published a paper in the journal PLOS ONE.The paper – titled “Changes in VO2max and cardiac output in response to …
Read more

Acceptance to the Panetta Congressional Internship Program typically means spending two weeks at the Panetta Institute in Monterey to prepare for a nearly three-month stint in Washington, D.C., …
Read more