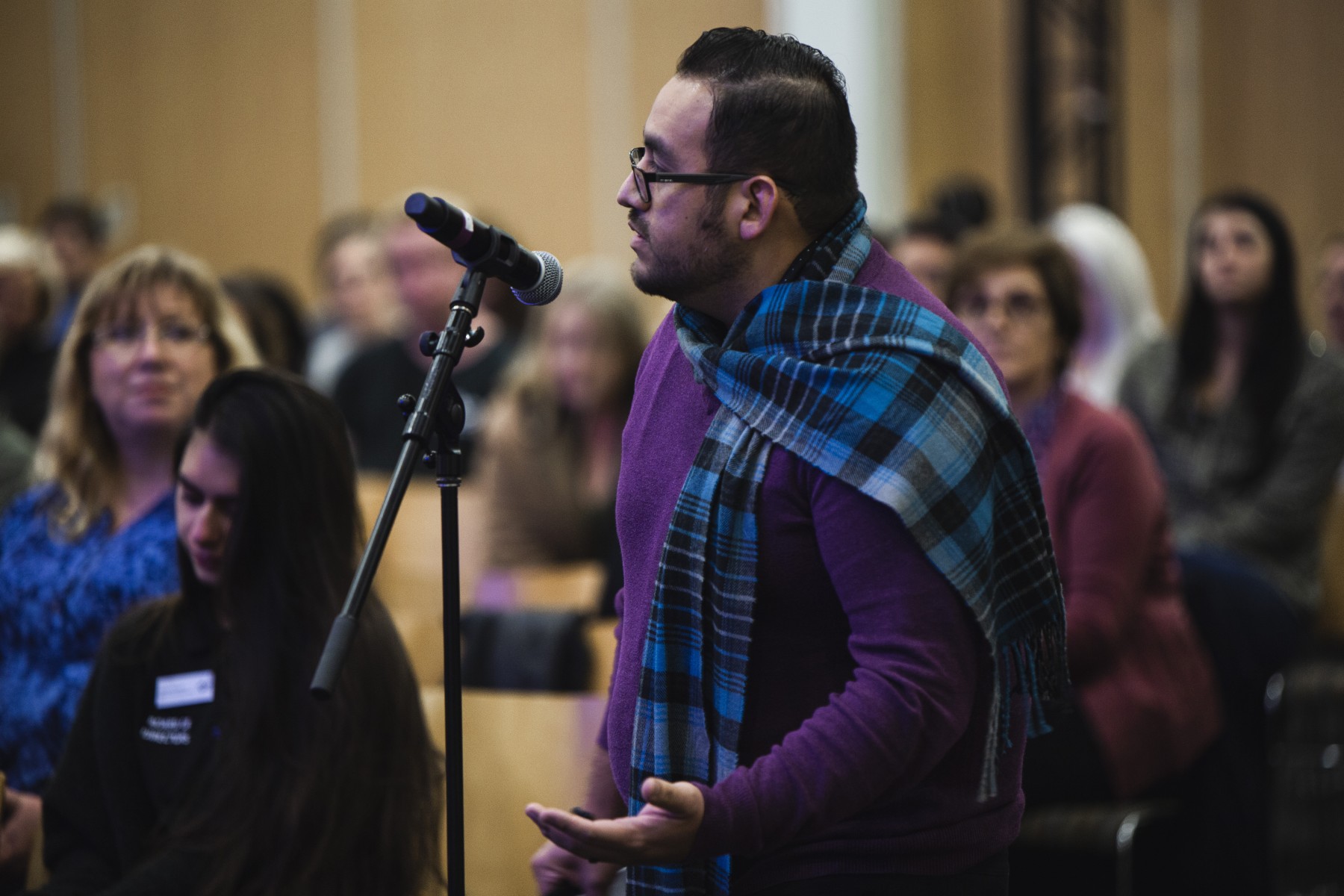 Presidential Search Open Forum
A member of the campus community speaks during a forum to discuss the search for a successor to President Karen Haynes. Photo by Alan Brown

The search for a successor to Karen Haynes, the longtime president of Cal State San Marcos, began in earnest Friday when the University hosted a forum where members of the campus community weighed in on the traits they’d like to see in a new leader.

Several hundred people gathered in the University Student Union Ballroom on Friday afternoon as the California State University Board of Trustees started the process of selecting Haynes’ replacement by holding a forum that was open to faculty, staff, students and community members.

After Jean Picker Firstenberg, the chair of the Trustees’ Committee for the Selection of the President, gave opening remarks and the other members of the trustees’ committee and advisory committee introduced themselves, more than 40 people from the audience took their turns at the microphones, providing their input on what skills and qualities are vital in a new president.

“It has been the highest honor of my life to serve on this board,” Firstenberg said at the outset. “I’m so honored to have been asked to chair this search committee. We all want to hear what you have to say today.”

Added trustee Debra Farar, who was also part of the search that resulted in the hiring of Haynes in 2004: “This is the most important thing we do, is select leadership for each of our campuses. Each of you have representatives on the committee, and they want to hear from you. They want your input. We take it very seriously. It is critical that you lend your support and your voice to the process.”

The main themes that emerged from the speakers were that the University should seek a president who strives for diversity and inclusion, who prioritizes first-generation college students, and who builds partnerships with local communities.

A president, in other words, who’s a lot like Haynes, who announced in September that she plans to retire next summer after 15 years leading CSUSM.

As one speaker put it, “The next president will have big shoes to fill.”

The advisory committee is composed of representatives from the faculty, staff, students, community and alumni, as well as a member of a campus advisory board. Also on the committee is a vice president or academic dean from the campus and a president of another CSU campus – both selected by CSU Chancellor Timothy P. White. Both committees function as one unified group.

In addition to Farar, CSUSM chemistry and biochemistry professor Jackie Trischman was on the committee that led to the hiring of Haynes in 2004.

The current search is being orchestrated by Isaacson, Miller, an executive search firm out of San Francisco. The company ran the searches for several recent CSU presidents, including Ellen Junn, the president of Cal State Stanislaus and a member of the advisory committee.

Over the next several months, the trustees’ and advisory committees will review candidates and conduct interviews. The finalists will meet with the Board of Trustees at their meeting in March.

“This is a great campus,” Firstenberg said to close the forum. “I hope Karen Haynes is watching this on video, and I hope the next president will watch this.

“We have a very tough job, but because of what you have shared with us, we’ll do our very best.” 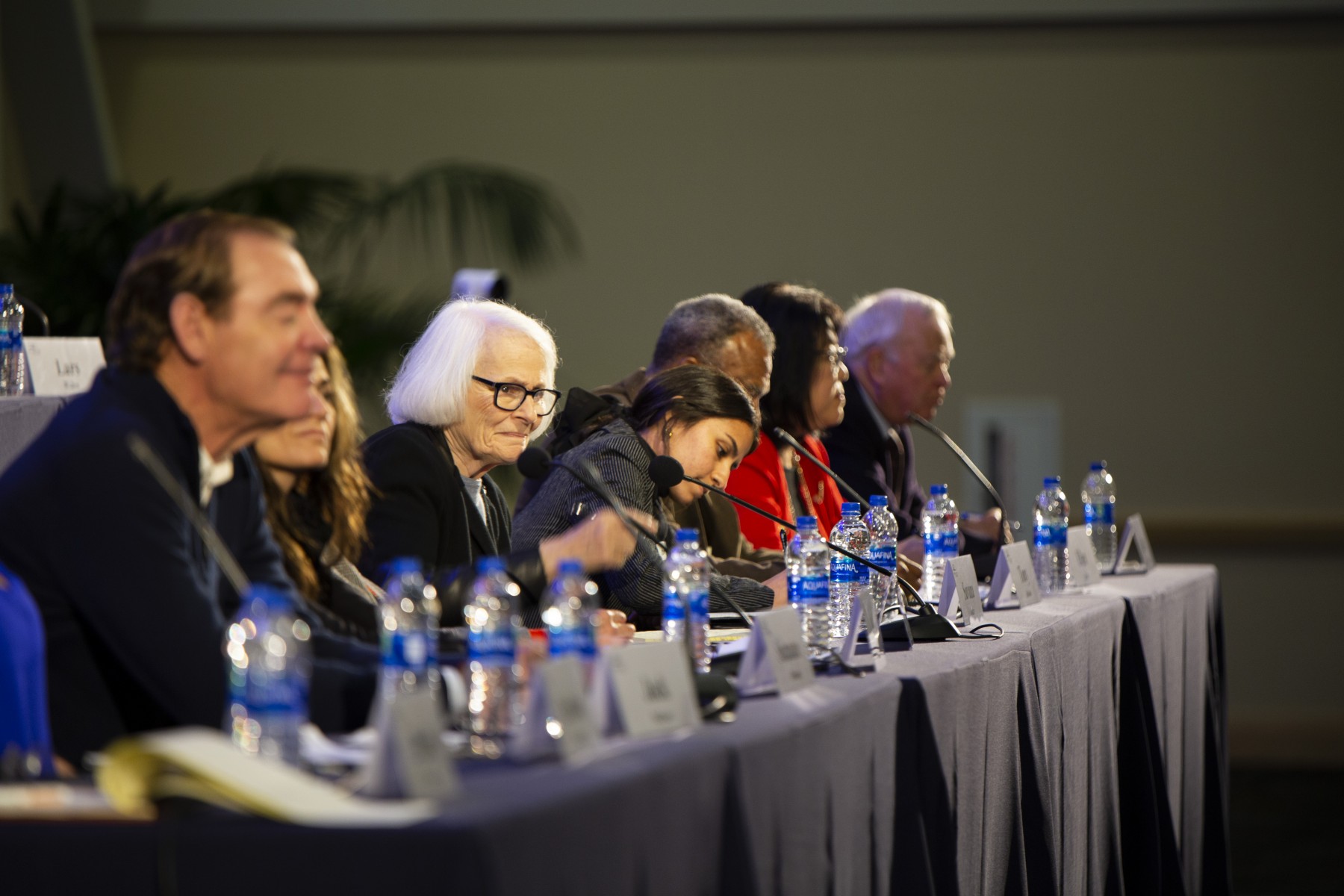 Presidential Search Open Forum
Jean Picker Firstenberg (third from left), the chair of the CSU Trustees' Committee for the Selection of the President, listens at the open forum at CSUSM last week. Photo by Alan Brown