Looking Back on Successes of 2017

As the end of the year quickly approaches, many are already looking ahead to 2018.

But before putting the finishing touches on your list of New Year’s resolutions, let’s take a look back at some of the many successes at CSUSM in 2017, and some of the most talked about stories.

The University received national recognition, celebrated achievements and broke records, from our highest number of diplomas awarded in May to a record number of students stepping foot on campus in August. 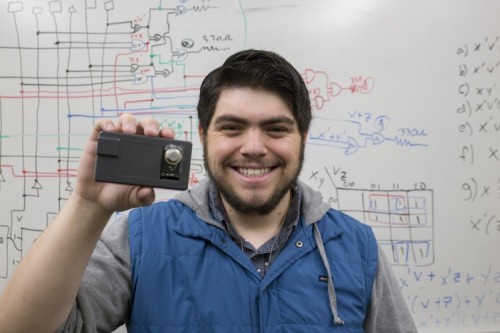 CSUSM is developing innovative degree programs in software and electrical engineering -- software was approved by the Academic Senate in December 2017 -- reflecting the University’s longstanding commitment to practical experience consistently emphasized by the other degree programs in the College of Science and Mathematics. 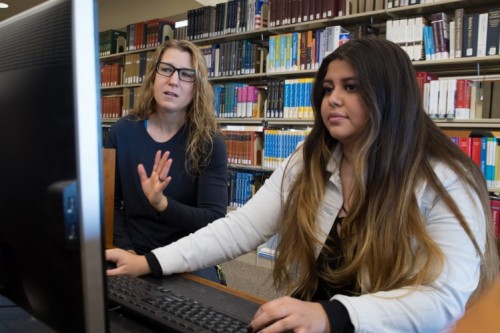 Dean Jennifer Fabbi and her staff at the CSUSM Library are on the front lines of fighting fake news. “When I first got into this field, it was all about helping people find information,” Fabbi said. “Information was scarce and you often needed a librarian to find it. Now you have a glut of information; we’re drowning in it. But people often don’t have the skills to evaluate that information for biases and legitimacy.”

César Chávez: The Story Behind the Statue 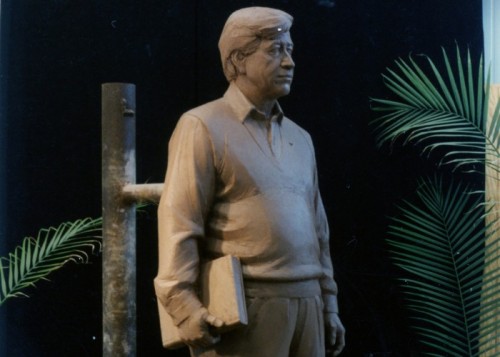 Twenty years ago, CSUSM unveiled its first outdoor public art – a bronze statue of civil rights activist César Chávez. At the time, the north-facing statue seemed far from the four university buildings on the southwest side of campus, but as history would prove, the César Chávez statue would not only reflect the heart of CSUSM, it would one day become the center of campus. 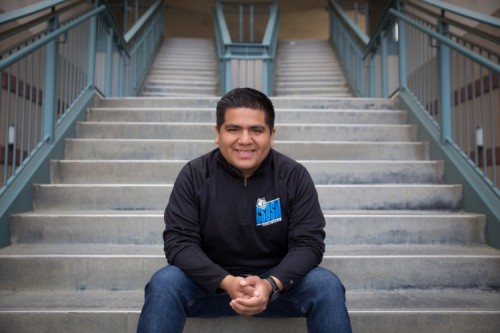 Carlos Olivares had a difficult time adjusting to life in the United States after moving from Mexico when he was 9. “I struggled a lot growing up,” Carlos said. “I struggled adapting to a new culture and I rebelled quite a bit.” Carlos overcame those struggles, becoming the first in his family to attend college, graduating in May with a bachelor’s in human development. 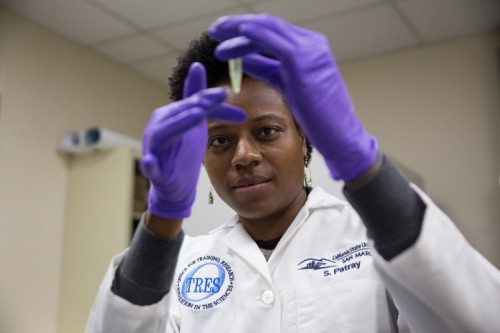 Nearly a decade as a refugee after fleeing a brutal civil war? Check. U.S. Marine combat engineer in Iraq and Afghanistan? Check. Promising biochemist who has been accepted into among the most prestigious research institutions in the world? Check. Meet Sharon Patray, who received her bachelor’s in biochemistry in May and is now in a Ph.D. program at Johns Hopkins University.

From Teen Mom to College Graduate 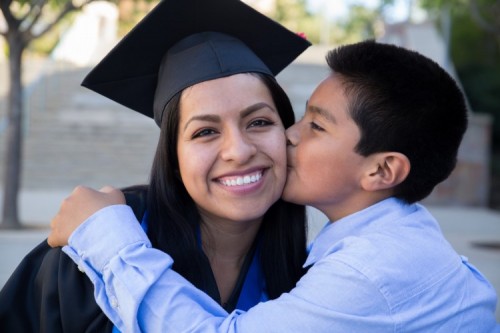 Psychology student Erica Alfaro beat the odds when she crossed the commencement stage in May and joined the 2 percent – the small number of teenage mothers who earn their college degree before turning 30. From discovering that she was pregnant at age 15 to dropping out of high school to overcoming years of domestic violence, Erica overcame numerous challenges on a decade-long path to her degree. 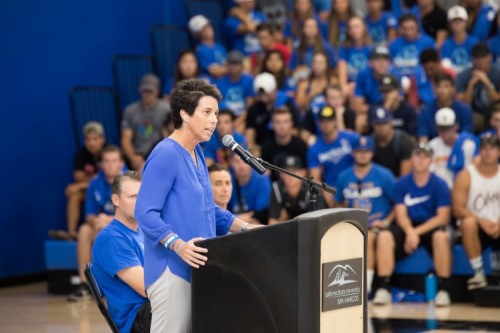 The Cal State San Marcos athletics program has come a long way since its inception in 1998. Back then, the athletics department had two coaches for its six teams. Today, CSUSM has 13 teams and more than 300 student-athletes. The athletics department celebrated another important milestone on July 14 when it became a full-fledged NCAA Division II member after successfully completing a three-year transition period. 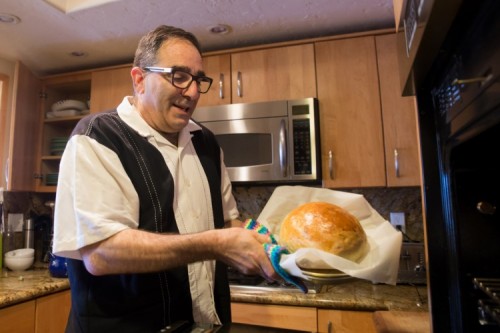 Cal State San Marcos marketing professor Glen Brodowsky is a popular guest at dinner parties. While some might pick up a bottle of wine on the way to someone’s home, Brodowsky arrives with a basket of homemade breads. “They say man cannot live by bread alone,” Brodowsky said. “Watch me.”

Finding a Purpose after Prison 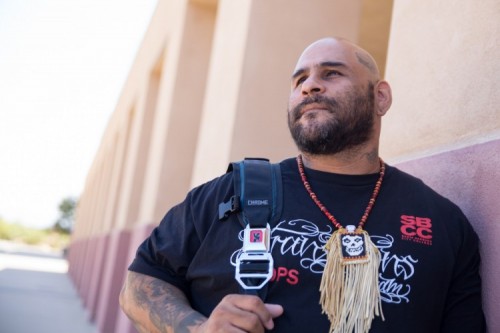 Being sentenced to prison wasn’t the most terrifying experience of Martin Leyva’s life. When you’re arrested for the first time at age 13 and you spend the next two decades in and out of jail and prison, it’s easy to become accustomed to life behind bars. No, terrifying for Leyva was stepping on to a college campus for the first time.

Life on the Chicken Ranch: Roots Run Deep at University 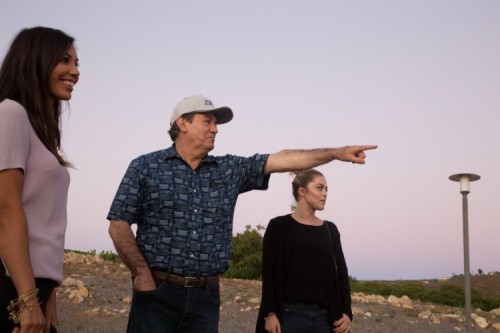 Arturo Villalobos’ family has deep ties to the Prohoroff Poultry Farm. His parents both lived and worked on the farm as did many of Villalobos’ seven siblings. Though the farm has been gone for decades, the connection remains. On the land where Villalobos used to spend nine hours a day, six days a week working as mechanic on the farm, his daughter and niece come to work each day as employees of CSUSM.

A New Era of Crash 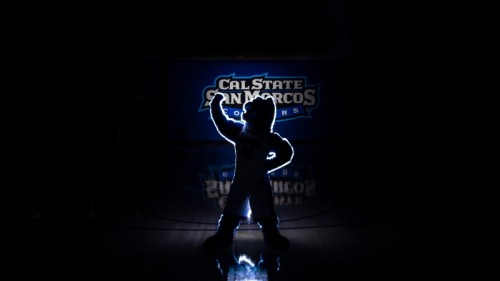 Amid the excited roars of more than 1,000 students and fans at Cougar Madness, CSUSM’s mascot debuted with a new look, feel and attitude, ready to help athletics compete to its full potential in NCAA Division II. Crash the Cougar surprised the crowd when the new mascot took to the court following the team introductions during the late-night pep rally that kicked off the basketball season. 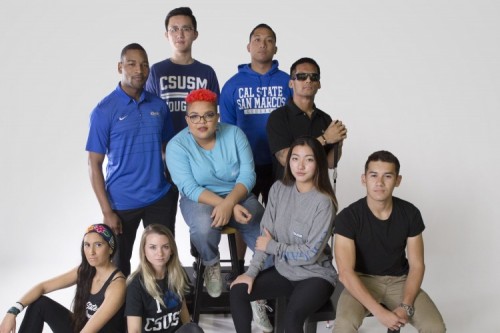 Diversity isn’t a fad. It’s in our DNA at Cal State San Marcos. More than demographics, diversity at CSUSM represents three core values: inclusion, social justice and equity. From the University’s early days, founding faculty blazed a path for a new kind of university, one that didn’t shy away from diversity and was intently focused on serving the public good.

Looking Back on Successes of 2017