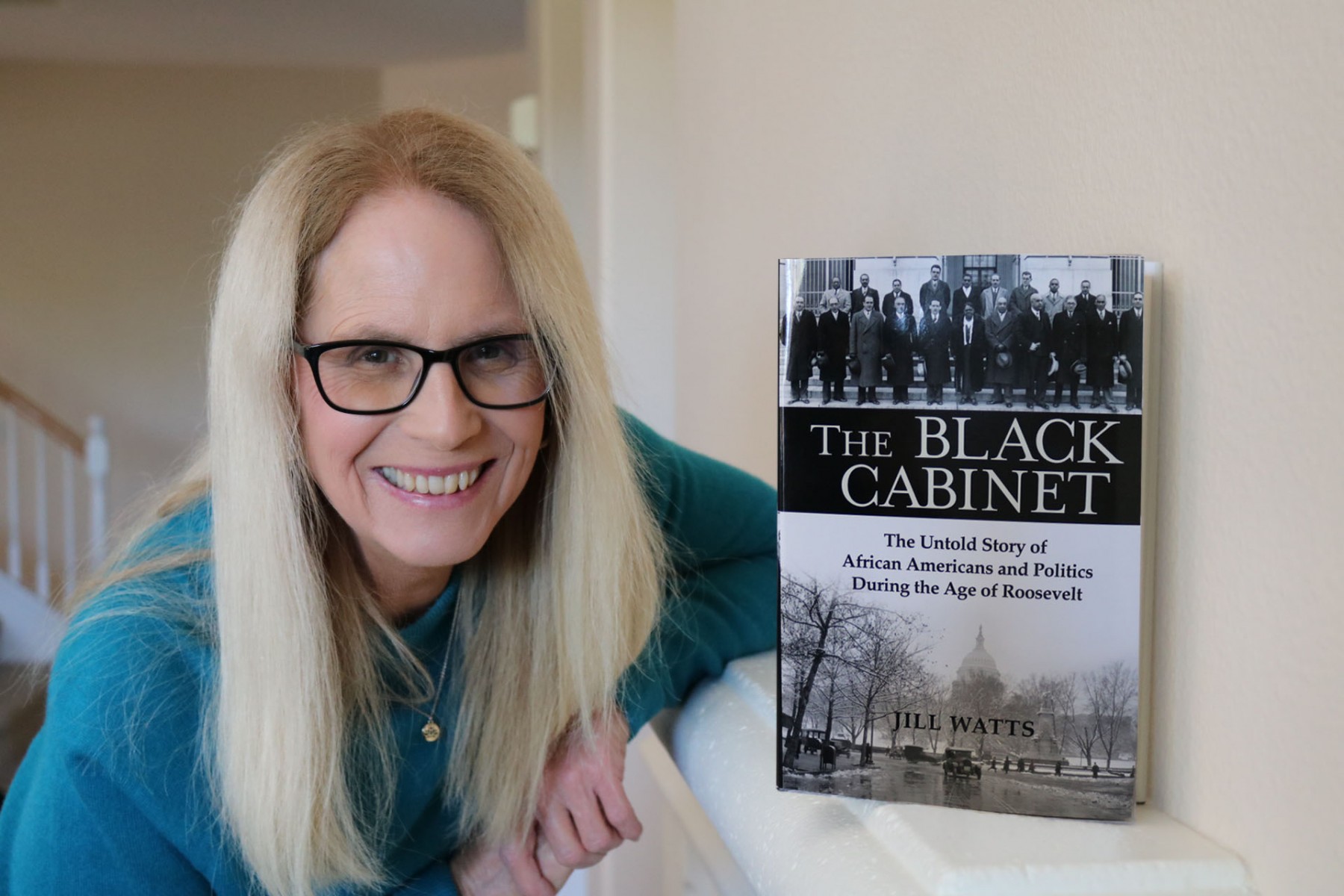 The fourth book by longtime history professor Jill Watts was published on May 12.

As a professor of history, of course, Jill Watts is also a student of history.

Watts knew that many U.S. history textbooks, in the all-important pages about the hugely consequential Franklin Delano Roosevelt presidency, make passing references to what the black press of the day coined the “Black Cabinet,” an unofficial group of African-American advisers to FDR as he navigated the politics of the Great Depression and the New Deal in the 1930s.

Watts was working on a different project as the follow-up to her acclaimed biography of Hattie McDaniel, the first African-American to win an Academy Award, but she wasn’t particularly inspired by it. This was in January 2009, and inspiration was in the air as the nation prepared to inaugurate Barack Obama as its first black president. Watts interpreted it as fate whispering in her ear.

“I thought, ‘Why don’t I write something about the Black Cabinet? Nobody really has done anything on them,’ ” recalled Watts, who has taught at Cal State San Marcos since the early 1990s, soon after the university’s founding. “It seemed like the natural beginning of that story where you have the arrival of the first black president in the White House.”

Watts never imagined that it would take more than a decade, but her fourth book has finally arrived. “The Black Cabinet: The Untold Story of African Americans and Politics During the Age of Roosevelt” was published on May 12 by Grove Atlantic.

Nor could Watts have imagined that, after such a long and laborious process from idea to fruition, her book would be released in the middle of a pandemic as COVID-19 continues to spread across the world. She had a book tour scheduled for this summer that her publisher was forced to cancel.

“So I feel like the book is still relevant, but I also feel like worrying about the release is so small compared to what’s going on in the bigger world. People are dying. How do we rescue them? Students are struggling. How do we make sure they can get their education and feel safe? Those are the big issues. Hopefully, the book will have a lasting impact.”

The Black Cabinet certainly did. They were a large group of African-American leaders whose work was highly influential even though it was mostly done in the shadows, outside of the public sphere. They were official appointees of the federal government, but they weren’t organized into a cabinet by Roosevelt, nor did he take their counsel very often. Rather, the members had to organize themselves, and they made their voices heard mainly through white administration officials or especially Eleanor Roosevelt. And they were instrumental in bringing about the migration of African-Americans from the Republican to the Democratic Party in the 1930s.

“Unlike what you might read in history textbooks, they weren’t window dressing and they weren’t puppets,” Watts said of the Black Cabinet. “Bringing the black community into the Democratic Party had an ideological basis. Even though FDR was falling short in serving African-Americans, the ideology of the New Deal and the shift of government toward caring about each individual citizen’s welfare was more consistent with the black community’s needs.” 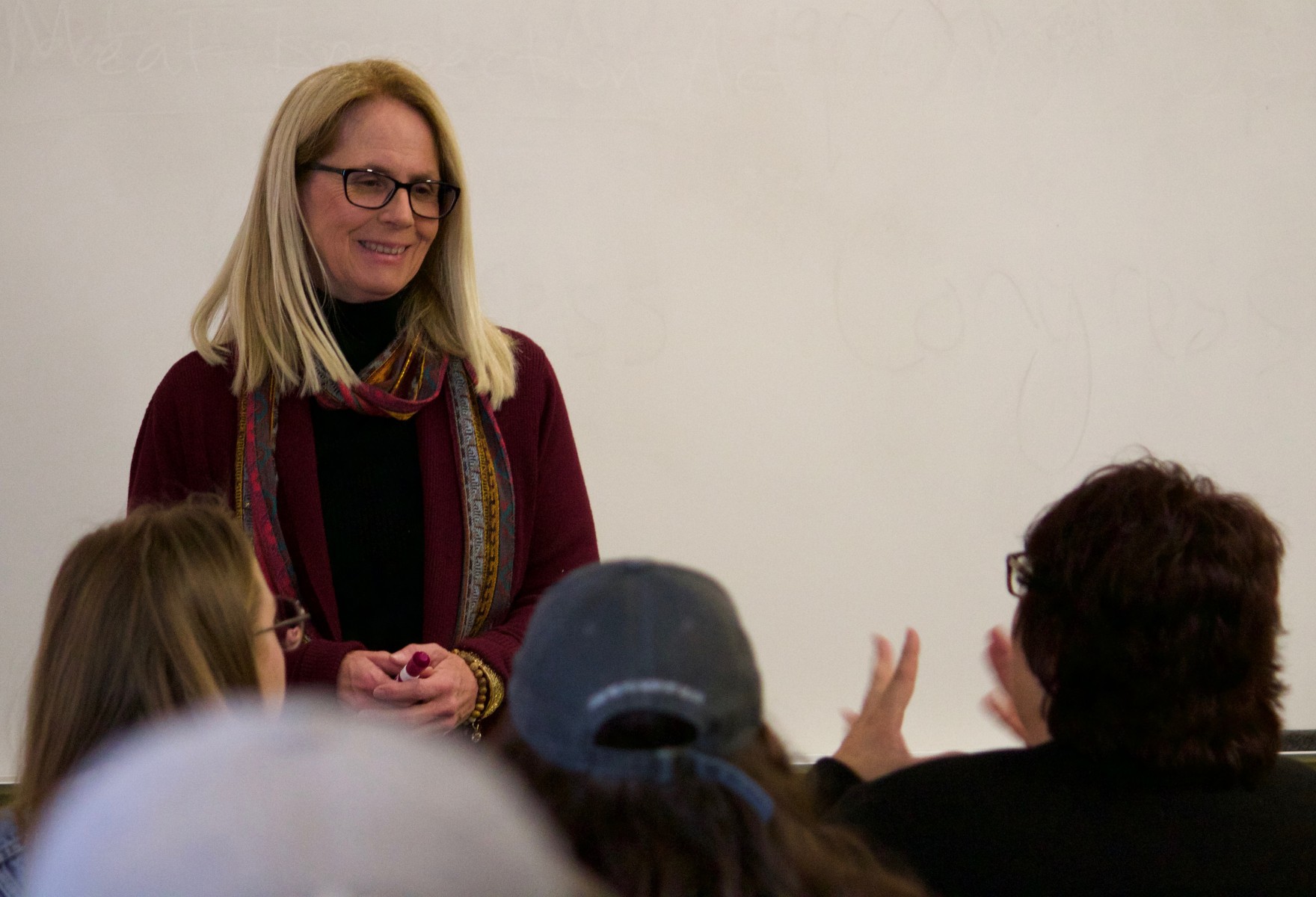 Jill Watts has taught at CSUSM since the early 1990s, when the university was in a strip mall with a Jerome's furniture store.

In chronicling the story of the Black Cabinet, Watts focused on the five most important members, four of them men: Robert Vann, a crusading journalist and attorney who was appointed to the Justice Department; Robert Weaver, who earned a Ph.D. in economics from Harvard University and later headed the office in the Department of the Interior that dealt with African-American issues; Alfred Edgar Smith, a journalist and educator who ran for FDR a New Deal program dedicated to remedying black unemployment; and William Hastie, a Harvard-trained lawyer who mentored pioneering Supreme Court justice Thurgood Marshall and pushed in vain for the integration of military troops during World War II.

Then there was the unofficial leader, Mary McLeod Bethune, who didn’t enter the administration until just before Roosevelt’s re-election in 1936, when she became the first African-American woman to direct a federal program. A friend of Eleanor Roosevelt’s since the ’20s, Bethune had the First Lady’s ear, and thus the president’s as well. Watts describes her as the crucial force in transforming the Black Cabinet from a loose collection of smart and like-minded individuals into a cohesive team rowing in the same direction.

“When she arrives, she holds a meeting in her home,” Watts recounted. “In the pivotal moment in the summer of ’36, she brings them all together and says, ‘We have to work together as one solid group, and we will share information and decide on our goals and support each other in our goals.’ She was the one who brought them together to work as a united front. And she was such a force of personality.

“There were a lot of others. That was the problem in writing the book. There were so many members who were part of it, but you couldn’t do everybody. It’s a pretty amazing group of people, one right after the other.”

Watts considers the foremost achievements of the Black Cabinet to be establishing a presence of African-Americans in the federal government, particularly the executive branch; implementing the first anti-discrimination clauses in federal contracts, which served as the bedrock of the monumental civil rights legislation of three decades later; and delivering desperately needed relief to the black community during the Great Depression.

Where did the Black Cabinet fail or fall short? They couldn’t convince FDR or Congress to take up anti-lynching legislation (unbelievably, it still hasn’t passed to this day), and they didn’t make the lasting stamp they sought in terms of integration. Watts regards them as an underappreciated bridge linking early 20th century black leaders like Booker T. Washington and W.E.B Du Bois with the 1960s civil rights movement orchestrated by Martin Luther King Jr.

Deciding how to organize the book wasn’t Watts’ only challenge. There was also the struggle to find contemporary documentation. As she points out, African-American life tends to go unrecorded anyway, and on top of that she faced the obstacle that the Black Cabinet met covertly, outside of official channels.

Watts benefited during her lengthy research process from advances in technology, as more and more government documents and black newspapers from the era were archived online. She also tracked down correspondence from the major players in the Black Cabinet, as well as interviews they conducted later in life.

“With this group, it’s like a needle in a haystack,” she said. “You go document by document – reading, reading, reading – and then finally, there’s one sentence and you’re like, ‘Oh my gosh, that’s them!’ ”

Writing about the Black Cabinet carried meaning for Watts beyond her work as a historian. She grew up in a predominantly African-American community in southeast San Diego and attended a black church. The pastor in that church, George Walker Smith, was also a community leader, and Watts’ father, Thomas, worked on Smith’s campaign in the early 1960s when he became the first African-American elected to a city office. Thomas Watts taught at an African-American school, Kennedy Elementary, for years.

Because of her childhood, Watts was deeply curious about black politics and culture, but it never occurred to her that she could pursue it as a career. As a senior science major at UC San Diego, she took a class on the transatlantic slave trade taught by Ed Reynolds, who’s now a professor emeritus at UCSD while also lecturing at CSUSM. After she finished the course, she switched her major to history, and Reynolds encouraged her to pursue graduate school. She completed a Ph.D. at UCLA in 1989 and was hired at CSUSM two years later, when the university was located in a small strip mall next to a Jerome’s furniture store.

“African-American history is American history, and we need more of it,” Watts said. “I do feel a commitment to the black community because I grew up in that community and learned so much from it. Being able to carry the stories forward so that people know them is important to me.”