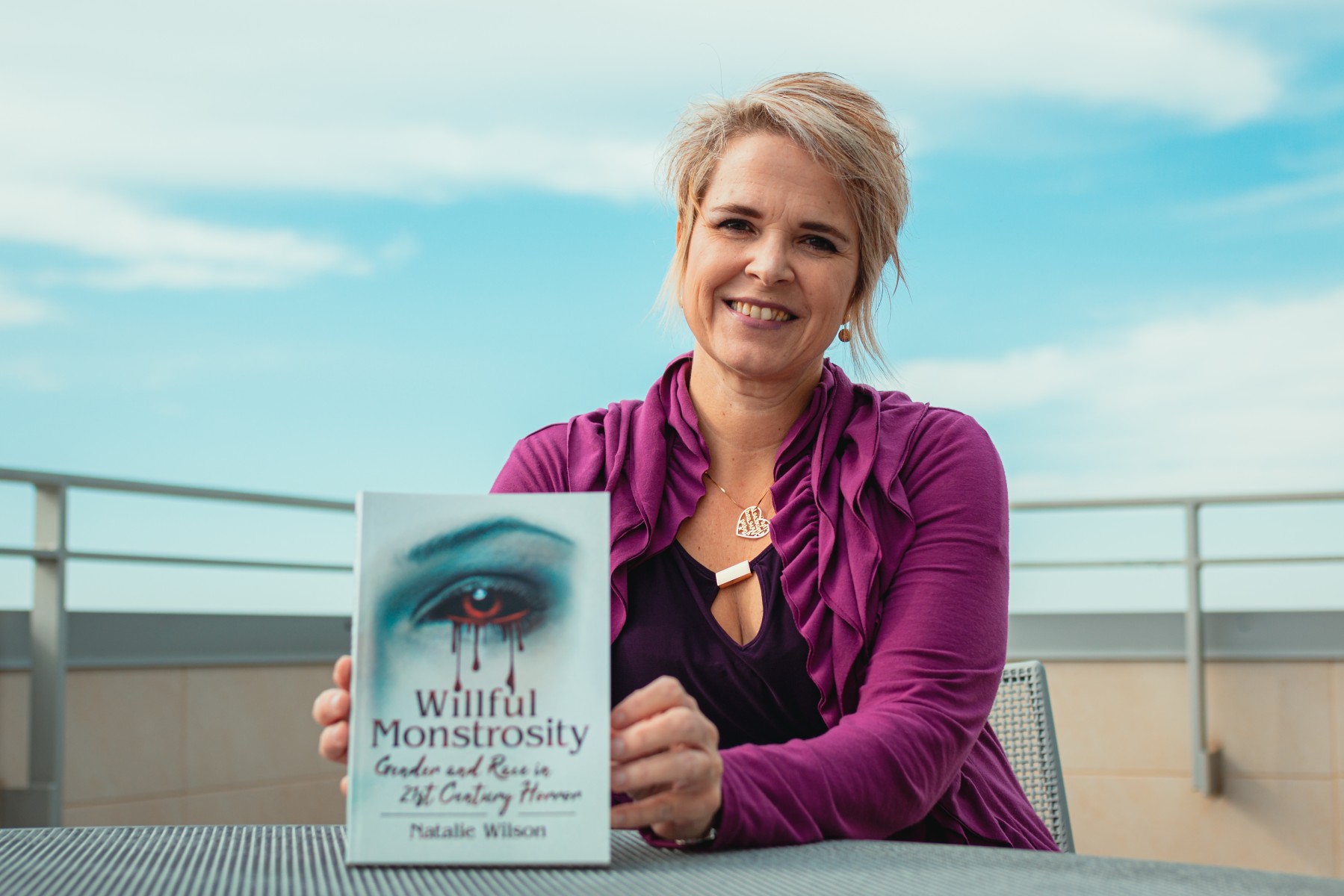 Wilson, who teaches primarily for the Women’s, Gender and Sexuality Studies Department and who has written extensively about horror in popular culture, has released a new book, “Willful Monstrosity: Gender and Race in 21st Century Horror,” examining characters in the current horror renaissance as metaphors for the battle against sexual violence, greed, police brutality and other social justice issues. Her work focuses on productions such as “Get Out,” “Us,” “Chilling Adventures of Sabrina” and “Stranger Things,” and works by authors such as Carmen Maria Machado, Justin Cronin and Helen Oyeyemi (follow her blog where she posts regularly on horror).

“Horror stories today specifically speak to things that are happening right now, including police brutality and the #MeToo movement,” she said. “Monsters can be seen as heroic figures. Even where monsters are not great, humans are worse.”

Wilson said she wrote “Willful Monstrosity” partly as a counterpoint to her last book, “Seduced by Twilight,” which critiqued the “Twilight” saga from a feminist perspective and highlighted the worrying message that the series sent to the teens who comprised its biggest audience: It’s OK to stay with an abusive partner.

“In this book, I wanted to look at the good or positive characteristics that monsters bring,” Wilson said.

“Us” offers a metaphor about oppressed workers and the underclass. “Get Out” illuminates white supremacy and black exploitation through its story detailing a white community’s practice of placing the brains of white people in black bodies.

“In a sense, the monstrous attacker is (white) suburbia itself – a place not safe for black bodies (as evidenced via real-world incidents such as the murder of Trayvon Martin and countless other black citizens),” Wilson writes.

Even when the monsters are, well, monsters, the audience needs to put things in perspective. She argues, for example, that the rape culture and domestic abuse permeating humans is far worse than the zombie world of the “The Walking Dead” series.

To make the work accessible and interesting for a wide audience, Wilson composed it as a compilation of reviews of horror and monster texts rather than a theoretical treatise. Sections include “Staying Woke in an Undead World: Political Undercurrents in Zombie Narratives;” “Draining the Imperialist White-Supremacist Capitalist Patriarchy;” “Wicked Good: Witches of the New Millennium;” and “Woman, Thy Name Is Monster.”

Writes Wilson: “In spite of – or perhaps because of – several years of marked global unrest and political divisiveness, the horror genre has served up hopeful tales of apocalypses averted and communities united against villainy. We have seen life-affirming visions of zombie children saving the planet (as in ‘The Girl with All the Gifts’), vampires eager to prevent humanity’s demise (as in ‘The Passage’), and witchy women dedicated to thwarting reproductive injustice (‘Red Clocks,’ ‘Penny Dreadful’). Monstrous outcasts have taken down mad scientists (‘Stanger Things,’ ‘The OA’), military corruption (‘The Shape of Water,’ ‘The Passage’), and devilish patriarchs (‘The Chilling Adventures of Sabrina,’ ‘Get Out’). As these examples convey, some of the most successful horror narratives of our times not only let the monster live, they also applaud the paradigm-busting and wall-breaching capabilities of cultural outsiders. With its feminist Middle-Eastern vampires, its deaf female heroes, its queer renegades, its autistic geniuses, its children-of-color world-saviors, and its gnashers of patriarchy, the 21st century horror landscape has thus far been chock-full of progressive, counter-cultural, monster-celebrating tales.”

A lifelong fan of horror, Wilson conducts research that involves parsing a story’s themes and placing them in a social context, examining how reviewers are interpreting the film or text, and delving into the comments of directors and writers.

“There is a long history of using horror stories and monsters to make a political statement and a commentary on social justice, and we’re currently seeing a horror renaissance and a huge growth in critically acclaimed horror films,” Wilson said. “Horror films such as ‘Get Out’ and monster movies such as ‘The Shape of Water’ are even winning Academy Awards.”

Both hard copy and ebook versions are available via Amazon.

Cal State San Marcos is preparing to open a new center on campus dedicated to the practice of mindfulness.The Center for Contemplative Practices officially will launch on Thursday, Nov. 10 with an …
Read more
NewsCenter